HOMES FOR SALE IN JEFFERSON TRACE 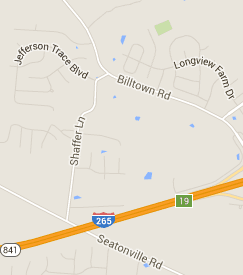 Click the map on the left to view each home for sale in Jefferson Trace. There is a satellite view button in upper right.

SHOPPING AND DINING NEAR JEFFERSON TRACE

For grocery shopping, there is a Kroger and Walmart within minutes of Jefferson Trace. One of the closest shopping malls to Jefferson Trace is Jefferson Mall which is about nine miles away. Mall Saint Matthews and Oxmoor Mall are both around fifteen miles away. The Paddock Shops is around seventeen miles away.
There are plenty of restaurants around Jefferson Trace. Aspen Creek, Smokehouse BBQ, Puerto Vallarta Mexican Restaurant, Hunan Wok Restaurants, Beef O’ Bradys, Sake Blue, and Mark’s Feed Store are just some of the few restaurants within the 40291 zip code.
If you enjoy golfing, there are two golf courses near Jefferson Trace called Woodhaven Country Club and Wildwood Country Club. Both country clubs are private and have a golf course, tennis course, and swimming pool. Each country club also offers space to rent for parties and weddings.

If you would like to learn more or have any questions about any of these Jefferson Trace houses for sale,  just click the "Request More Information" button on any property detail page. The Hollinden Team can provide you with past sale information, comparables, disclosures, PVA assessment, and tax information – we would love to answer any real estate questions you have.